The United States and Russia have been spying on one another and tapping into one another’s lines of communication for decades. Operation Ivy Bells, one of the most notorious and important espionage missions in American military history, reveals how spying was a crucial part of the Cold War.

In 1972, a joint CIA, U.S. Navy and National Security Administration mission to learn about Russia’s nuclear capabilities began, sending expert divers to the depths of the dark, freezing Sea of Okhotsk, approximately 190 km (120 miles) off Russia’s eastern coast. The goal was to intercept communication between the Soviet ballistic missile submarine base at Petropavlovsk on the Kamchatka Peninsula with Moscow’s Pacific Fleet headquarters at Vladivostok, around 2,260 kilometers (1,400 miles) away.

A detection of the USS Halibut (SSGN-587) by the Soviets would have meant dire consequences. The first step was to find a three-inch cable to tap into, although there was no evidence one even existed. It was a shot in the dark.

Although the divers faced great physical risk, their operation was a great success. Divers from the Halibut attached a 7 m (20 ft) listening device to the cables. Once they got enough information, the submarine returned to San Francisco and the first tapes detailing Soviet communications were shipped to Washington, D.C.

While some of the tapes only revealed conversations between sailors and their loved ones, others recounted details of secrets about Soviet war capabilities. The line was tapped for a decade until NSA cryptologist Ronald W. Pelton sold the information to the USSR in 1980.

The operation was unknown to the American public. It was a true test of U.S. capabilities to maintain secrecy and to keep the Cold War cold. At the time, the public was not aware it was possible to put ‘pods’ on top of undersea cables to listen to conversations.

Former U.S. Navy diver Garry Matheny recently wrote an account of his involvement in the mission in his book, God and Spies, and spoke to The Defense Post about the operation.

Q. What was Operation Ivy Bells?

Operation Ivy Bells was not a one-time intercept of foreign intelligence but an ongoing operation of multiple Soviet underwater military channels, 24 hours a day, which lasted [for decades]. [In order] to have peace treaties and strategic arms negotiations with the Soviets, we needed to know what they had. Not what they told us they had, but what they really had.

We were told it was like playing poker with someone. You would have the obvious advantage if you knew what the other guy was holding in his hand. He couldn’t bluff you. When our arms negotiators faced off with the Russians, our guys had the best and most up-to-date information. And when the Russians want to trade off some missile system we knew didn’t work, then our guys could tell them, ‘That’s okay. You can keep it!’”

Q: How important was this mission to the Cold War?

The information that was gleaned from this operation is believed to have helped us negotiate the Strategic Arms Limitation Talks (SALT II agreement) and other treaties, and many believe it helped bring the Cold War to an end.

Q: How much information do you think the Soviets had on the mission because of the betrayal?

The cable recordings continued after I left the Navy in 1975, and remained safe until the 1980s, when it was compromised by National Security Agency Cryptologist Ronald W. Pelton. Once the Russians found out about Operation Ivy Bells, they would no longer transmit their intelligence in the same way.

The Navy developed a device that could be left behind after a sub left the Sea of Okhotsk and continue to store the recordings. This was kept running by a mini nuclear reactor (plutonium-238). Because of the betrayal, in 1981 the Russians searched the area and recovered this device.

This pod was placed on public display in Russian’s Great Patriotic War Museum in Moscow. Soviet Vice Admiral Alexander Zhardetsky, former head of military intelligence, said many transistors inside this device were stamped “Made in the USA.”

Q: The moment of your important dive, were you calm? What would’ve been the consequences had you failed?

It was my dream come true. I was enjoying it. We were done with our dress rehearsals and had gotten past all the hurdles, and now I was doing my heart’s desire. We all have different emotions and look at things differently. But for me had I not been chosen for this dive or failed in it, I would have felt like a failure.

Q: Do you have any regrets about your mission?

I wish I could do it again. It was fun.

Q: Had the general public known about the mission at the time, what do you think would have been the reaction?

I can only respond for myself, but I was glad. One time an officer in charge of security walked up to me and asked, “What do you think of the mission?”

My response then and still is, “I think it’s smart.”

“Of course.” I said, “You know the Russians are trying to get information from us. It would be unwise not to do the same.” 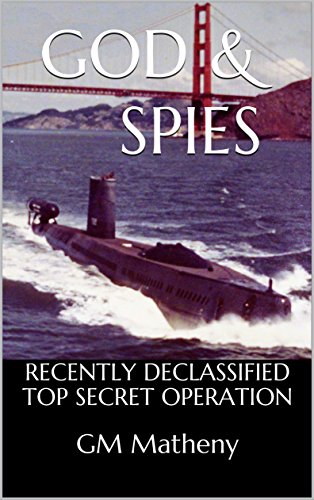 Q: How important is this mission in light of today’s U.S.-Russia relations?

Basically, we were ‘in their head’ for 10 years, listening to them talk of their war plans with the strengths and weaknesses of their equipment and troops. We were the ‘unseen guest’ at their dinner table listening to their uncensored concerns and fears. In short, we learned how they thought; that is still valuable today.

Q: Your book discusses your religious faith. What was the key way in which your faith influenced your mission?

I had trusted Jesus Christ as my savior just before I came on the USS Halibut. But I still wanted to make the decisions on what I was going to do with my life. I was a weak Christian, needing encouragement just to show up at the Bible study. Only eight out of the 21 saturation divers would be chosen to make the dives. And at that time being chosen to be one of the eight divers was the most important thing in my life.

I prayed, “Lord, please let me make this dive.” I made the usual promises to God about living a better life for Him etc. But I kept getting the impression that the Lord only wanted to know one thing: “What if I don’t let you make this dive, will you serve me anyway?” No, I didn’t hear God’s audible voice, just the thought.

It seemed like a bitter cup to drink. I felt heartsick, thinking about being passed over and someone else taking my place. You’re going to have to read the book to find out the rest.

God and Spies is a firsthand account of the deep sea dives and mission of Operation Ivy Bells by G.M. Matheny. It is published by Amazon Publishers and available on Amazon.

Israeli, US Firms to Develop Indoor Mini-Drone for First Responders

11 hours ago bruce lee
We use cookies on our website to give you the most relevant experience by remembering your preferences and repeat visits. By clicking “Accept All”, you consent to the use of ALL the cookies. However, you may visit "Cookie Settings" to provide a controlled consent.
Cookie SettingsAccept All
Manage consent